The #1 Mistake PI Practices Make: Not Going Hands-On At The First Appointment

Go Hands-On at the First Appointment.

Our Secret Weapon campaign is and has been one of our most popular and successful campaigns for many years now. Through the years, we have noticed a big difference between the doctors who have GREAT success, and the ones that are just so-so. Recently we realized that this particular issue actually spills out of the campaign and applies to all PI Patients in general; whether the practice is running this campaign or not. The doctors who do this ONE THING increase their close rate ten fold compared to the ones who do not. What do they do?

They go hands-on with EVERY Patient on the FIRST visit.

That’s right. Every Single Patient. The doctors that are doing at least a screening for every patient on their first appointment, regardless of insurance status, or how they are explaining away their pain, have a significantly higher chance of closing that patient. The ones that don’t? They end up hearing that many of those patients have gone to their competitor instead. That alone should be enough reason to change how your office does things, but we know that isn’t the old school way of Chiropractic, so here are a few additional reasons to consider.

What were the expectations of your patient when they walked in your door? Regardless of what sent them there, their expectation was likely that they would see the doctor they had an appointment with, that he would do something to see if the patient had an injury. This is what happens with every other doctor’s appointment they have had for their whole life.

This is doubly true for patients that set their appointment as part of any marketing that you are doing. What were they being told they would get if they came to see you? Is a Free Evaluation / Screening part of the offer?  How will they feel if instead of actually seeing the doctor they were told they were going to see, for the evaluation they were told they were going to receive, they are instead told that they need to go see an attorney first, or that their saying they haven’t noticed any pain means the doctor won’t see them.

How would you feel, after taking off work, driving to this office, maybe filling out some forms, that you are not going to get what you were expecting to get. And that, in some cases, you should come back tomorrow or next week to get this thing. Would you bother? Neither would a lot of the patients that we have spoken to.

“I was told that this doctor would examine me to see if my accident caused any injuries. I told him I didn’t think I had any pain, and so he didn’t even bother to do an exam. But I saw a different doctor the next week and after he did an examination, he knew I had been having headaches and told me that actually from my accident – I didn’t even think of mentioning them to the first doctor.”

“I went in for a Free Examination and did all of the paperwork, but then was told to go contact an attorney and come back for my examination after. I took off work for that appointment, what a total waste of time!”

“I forgot my insurance paperwork, but I didn’t think it would be a big deal, because this was supposed to be a Free Examination, and insurance would only be billed if I decided to continue care. They wouldn’t even see me, so it’s probably a scam.”

These are definitely not things you want patients saying to their friends and family about your practice. What if they went so far as to post it online?

So, a patient comes in and they didn’t bring their insurance paperwork, even though they have been told several times to do so. What scenario is most likely to get then to return:

Punish them for being human by telling them that they won’t be seen today, and should take off work again tomorrow to come back with their insurance AND THEN you will do a screening.

Tell them that you really are supposed to confirm coverage at the first appointment, but that you don’t want them to have to take off more time, so you are going to make sure they see the doctor for their exam so long as they promise to call you today or tomorrow with the details.

Tell them that the first step in the process is for them to obtain this attorney. Give them the name and phone number of a good one to contact, and tell them to call and make another appointment for their examination after they have retained him. When the patient mentions that this could have been done over the phone, and that he wishes it had been as he is in a lot of pain and would have preferred to avoid driving, your staff tell him that this is just how things are done.

Tell him that you definitely want to complete the screening today so that the attorney knows just how bad his injuries are, as that will make the case move forward a little quicker.

Only the second option in either of those scenarios is going to inspire loyalty from a new patient. They don’t know your practice, they don’t know anything about Chiropractic. All they will know is that they expected one thing, got something

There are lots of reasons that practices get stuck in dynamics of “Us vs. Patient” where there is little respect for the patient’s time, feelings, or expectations. The why is not terribly important.  But you MUST remember: above all else, your practice is a business and MUST take care of its customers in order to be able to continue taking care of customers.

This is not an easy habit to break – particularly when you have team members who feel very strongly about the order / process that they have been using up to this point. For that reason, JustUs is offering FREE Coaching in this matter to anyone who has an active appointment setting campaign. We will schedule a time that works best for your team and go over this theory so that they have all of the tools they need to move forward. Follow up coaching if they need a reminder or have questions about certain scenarios will also be done at no cost.

Have Questions or want to schedule your coaching? There are a few ways to reach us:

© 2022 JustUs Chiropractic Marketing | All designs are the creative and intellectual property of JustUs Advertising LLC. 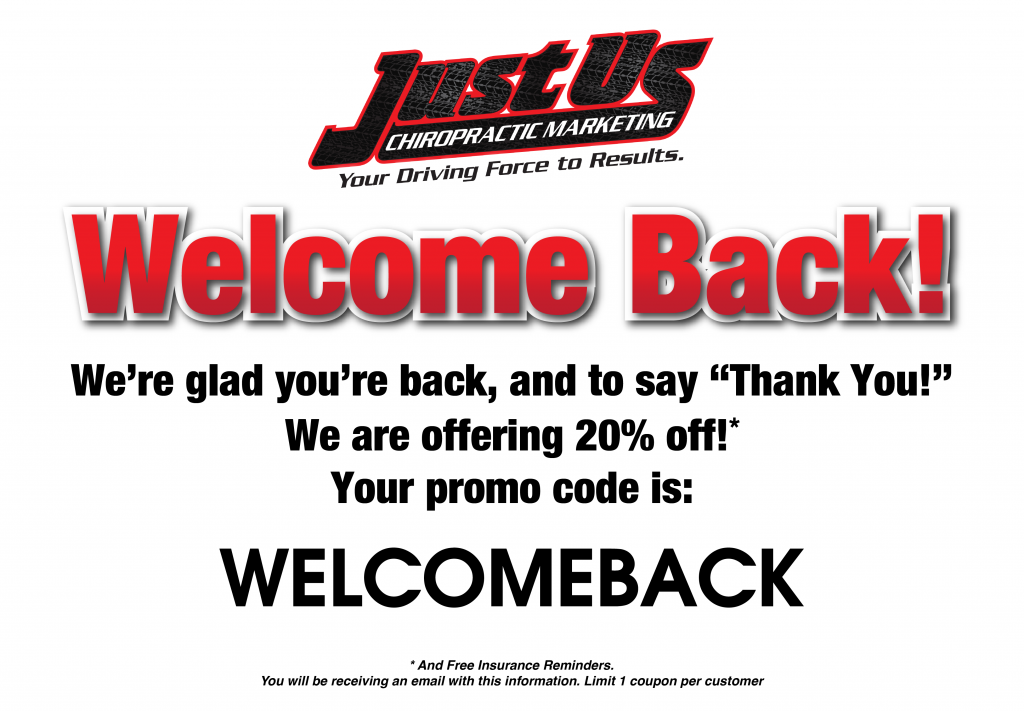 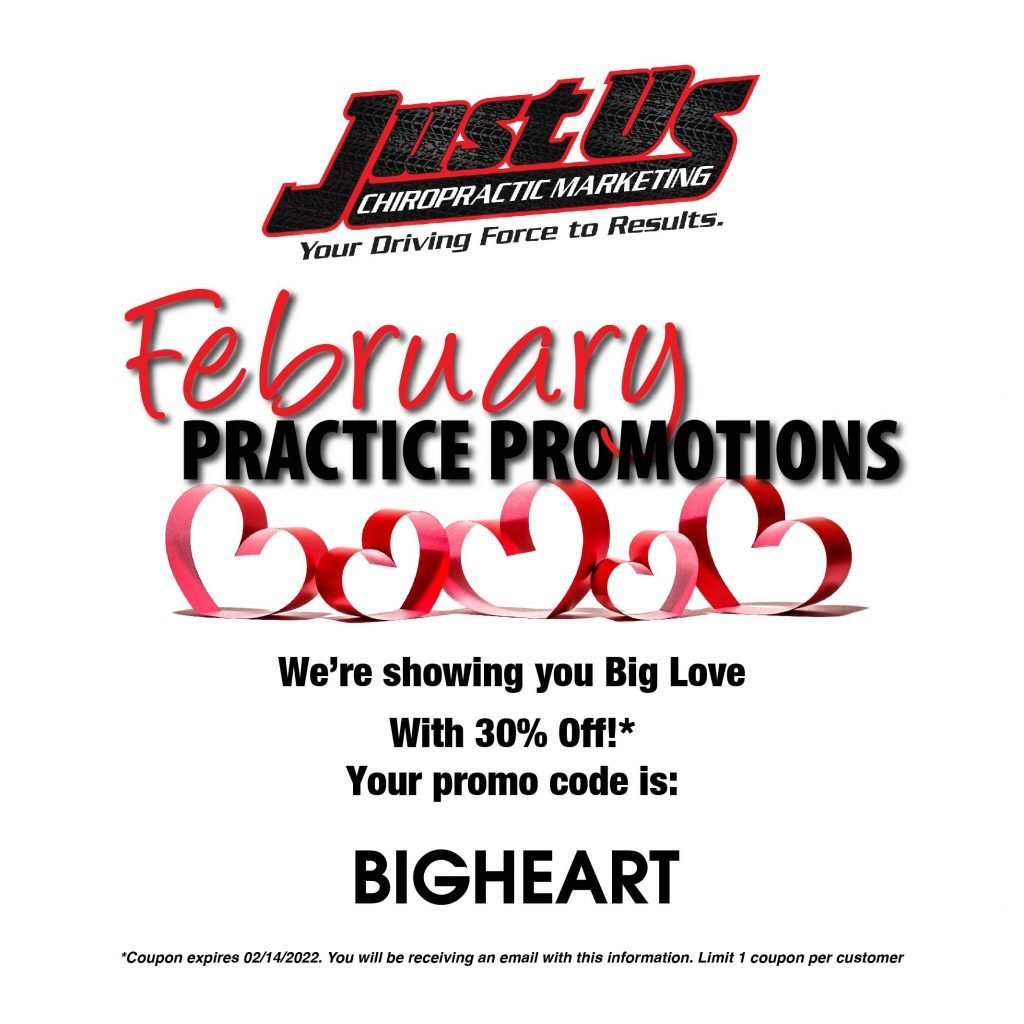